All Eyes on January Fed Meeting

Momentum of Growth is More Important Than Record Q3 Growth

As was the case with other developed markets, UK Q3 GDP saw a mechanical record rise in growth as the economy re-opened with a 15.5% quarterly increased, slightly below consensus of 15.8%. That said, UK GDP remains 9.7% below Q4 19 levels and was down 9.6% Y/Y. The Pound saw a limited reaction to the data given that this looks at the UK economy from a rear-view mirror. Keep in mind that since Q3, the UK had introduced tighter tiered lockdown measures in October before another national lockdown in September. In turn, the momentum of growth has already waned significantly since Q3 and is at risk of a double-dip recession as a contraction in Q4 growth becomes increasingly likely.

UK Took a Bigger Hit From Coronavirus Than Other Developed Markets

Since Q4 2019, the UK has taken the largest hit from coronavirus compared other DMs with the UK down 9.7%, which is nearly three times the size of the drop of 3.5% in the US. Elsewhere, the drop is also twice as large as the fall seen in Italy, Germany and France. With that in mind, the UK stands to gain the most from positive vaccine updates. 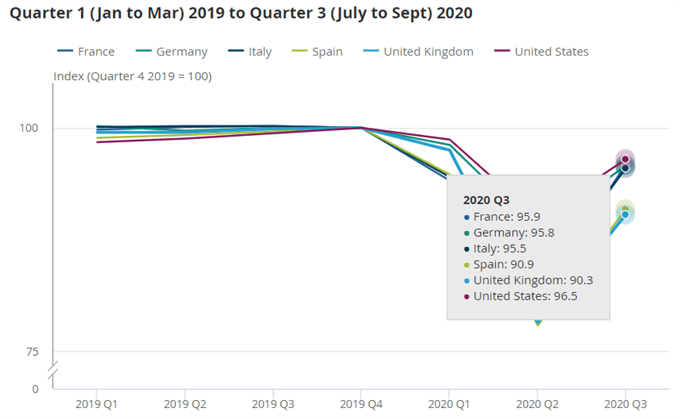 As noted above, the UK Q3 GDP is largely outdated, thus there was little in the way of a reaction in the GBP. Looking ahead, the narrative tug of war between vaccine optimism and surge in coronavirus cases in the US are likely to dictate sentiment in the near-term. Alongside this, as we approach yet another soft Brexit deadline (November 15th) eyes will be on Brexit headlines. Although, expectations of a deal to be reach by the soft deadline is minimal following reports that significant differences remain, while source reports have also highlighted that talks are said to have not gone well this week.

of clients are net long.


of clients are net short.

Recent price action in EUR/GBP would appear to suggest that Brexit risks are somewhat minimal. That said, with this weeks deadline set to be missed, there is still room for more political posturing before a deal is reached, in turn, I do not rule out another test of 0.90. However, as my base case remains that a deal will ultimately be reached, my bias is to fade rallies in the cross.

of clients are net long.


of clients are net short. 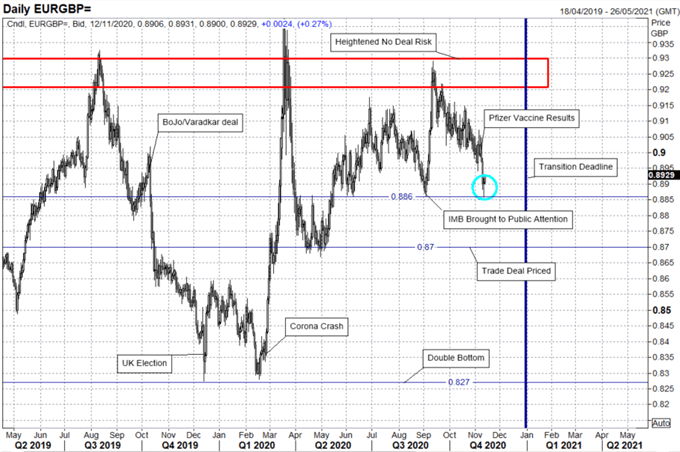 All Eyes on January Fed Meeting

Animal Crossing is getting an official makeup line

USD/CAD holds above key support near 1.2715 ahead of data, Yellen