Johnson sets out milestones for England’s ‘road to freedom’

Boris Johnson has put England on what he hopes will be a “one-way road to freedom”, setting out a “cautious” strategy for restoring normal life and economic activity by June 21 — midsummer’s day.

The prime minister’s map for lifting England’s coronavirus lockdown outlines many milestones, but it leaves key questions unanswered, and implies government support for the economy from chancellor Rishi Sunak for months to come.

Johnson set out a series of “no earlier” dates by which he hopes to open key sectors of the economy, guided by data — including the effectiveness of vaccines, hospitalisation rates and whether new Covid-19 variants emerge.

There are four main stages in the road map for lifting coronavirus restrictions.

From March 8, in the first part of Step 1, pupils can return to schools, two people from different households can meet outdoors for recreation, and care home residents can receive one visitor.

From March 29, in the second part of Step 1, two households will be able to meet in private gardens. People from different households can gather outdoors under the so-called “rule of six” restriction.

The “stay at home” order will be replaced by guidance encouraging people to stay local and work from home where possible. Most international travel will still be banned.

Step 2 will start no earlier than April 12, when non-essential retailers will reopen, alongside hairdressers, nail bars, libraries and museums. Self-catering holidays in England can also resume.

Indoor leisure facilities including gyms and swimming pools will reopen, and pubs and restaurants will be able to serve customers outdoors.

May 17 is the earliest date for Step 3, when most outdoor social contact restrictions will be lifted, and indoor mixing will be allowed between two households. Pubs and restaurants will be able to reopen indoor rooms.

Sports arenas will start to reopen within new limits: for example large stadiums like Wembley will be able to hold up to 10,000 fans.

On June 21, the earliest date for Step 4 or “freedom day”, Johnson hopes to be able to lift all legal limits on social contact and to reopen all remaining parts of the economy, including nightclubs.

What does this mean for Sunak’s Budget?

Some parts of the economy face weeks or months of further restrictions, but Sunak has drawn up his March 3 Budget with Johnson’s route to easing lockdown in mind.

He will focus on helping individuals and companies through what he hopes will be the final phase of the Covid-19 pandemic, and is putting jobs at the heart of the Budget.

For example, the government’s furlough scheme, due to end in April, is now expected to be extended. “We will not pull the rug out,” Johnson told MPs in the House of Commons on Monday.

Iain Duncan Smith, former Tory leader, urged the prime minister to review the timetable for the full reopening of pubs and restaurants, saying they employed “some of the poorest in society”.

Downing Street insisted that socio-economic factors had been carefully weighed when compiling the road map.

How has business reacted to the plan?

Retailers voiced concern about delays to reopening non-essential shops. Helen Dickinson, chief executive of the British Retail Consortium, a trade body, urged ministers to allow all shops to open as soon as data suggested it was safe.

“The cost of lost sales to non-food stores during lockdown is now over £22bn and counting,” she said. “Every day that a shop remains closed increases the chances that it will never open again.”

Kate Nicholls, chief executive of UKHospitality, another trade body, said there were few venues for which opening for outdoor business in April would be worthwhile. “A lot of people will think twice about reopening,” she added.

Sacha Lord, night-time economy adviser for Greater Manchester’s Labour mayor Andy Burnham, said there was a southern bias in allowing pubs with outside spaces to open earlier than others.

“The vast majority of [northern] pubs do not have beer gardens, a luxury only reserved for middle-class areas who have the space and financial capabilities,” he added.

But Craig Beaumont of the Federation of Small Businesses welcomed the cautious lifting of the lockdown. He said businesses were “more scared of a fourth wave [of coronavirus] and [another] lockdown than a slow reopening — we want this to work”.

Tony Danker, head of the CBI employers’ group, said the Budget would be crucial. “Extending business support in parallel to restrictions will give firms a bridge to the other side,” he added. “This is particularly needed for sectors who will have to wait for up to three months to reopen.”

Which parts of the road map are unclear?

The prime minister has set up four reviews, including a surprise one to consider whether “Covid status certification” — otherwise known as Covid-19 passports — could have a domestic use. The review will report before June 21.

Ministers have previously said domestic coronavirus passports, showing an individual’s vaccine or test status, would be “discriminatory” and “wrong”, and Johnson admitted they raised questions of ethics, legality and privacy. 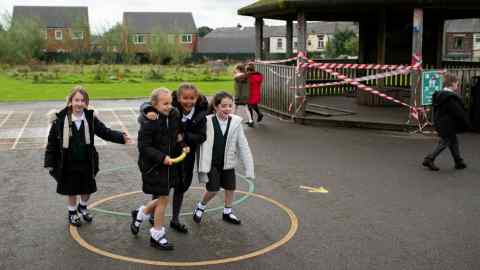 But he wants to see whether such documents — particularly those showing test information — could be used to open “hard-to-reach” parts of the economy, such as theatres or nightclubs.

Meanwhile a “global travel task force” will consider how to resume inbound and outbound travel, in a move that could potentially end the quarantine rules that are currently in place for England. The review could also allow the resumption of summer holidays overseas.

Downing Street said the review would be completed by April 12, but there will be no non-essential foreign travel before May 17 at the earliest.

A third government review will look at the opening of events with large crowds, such as festivals.

The fourth will look at social distancing rules, including the so-called one metre-plus stipulation and the wearing of face masks. It will report back by June 21, and people have been told to continue to work from home if possible until the review is complete.

A Boeing 777 averted the nightmare scenario